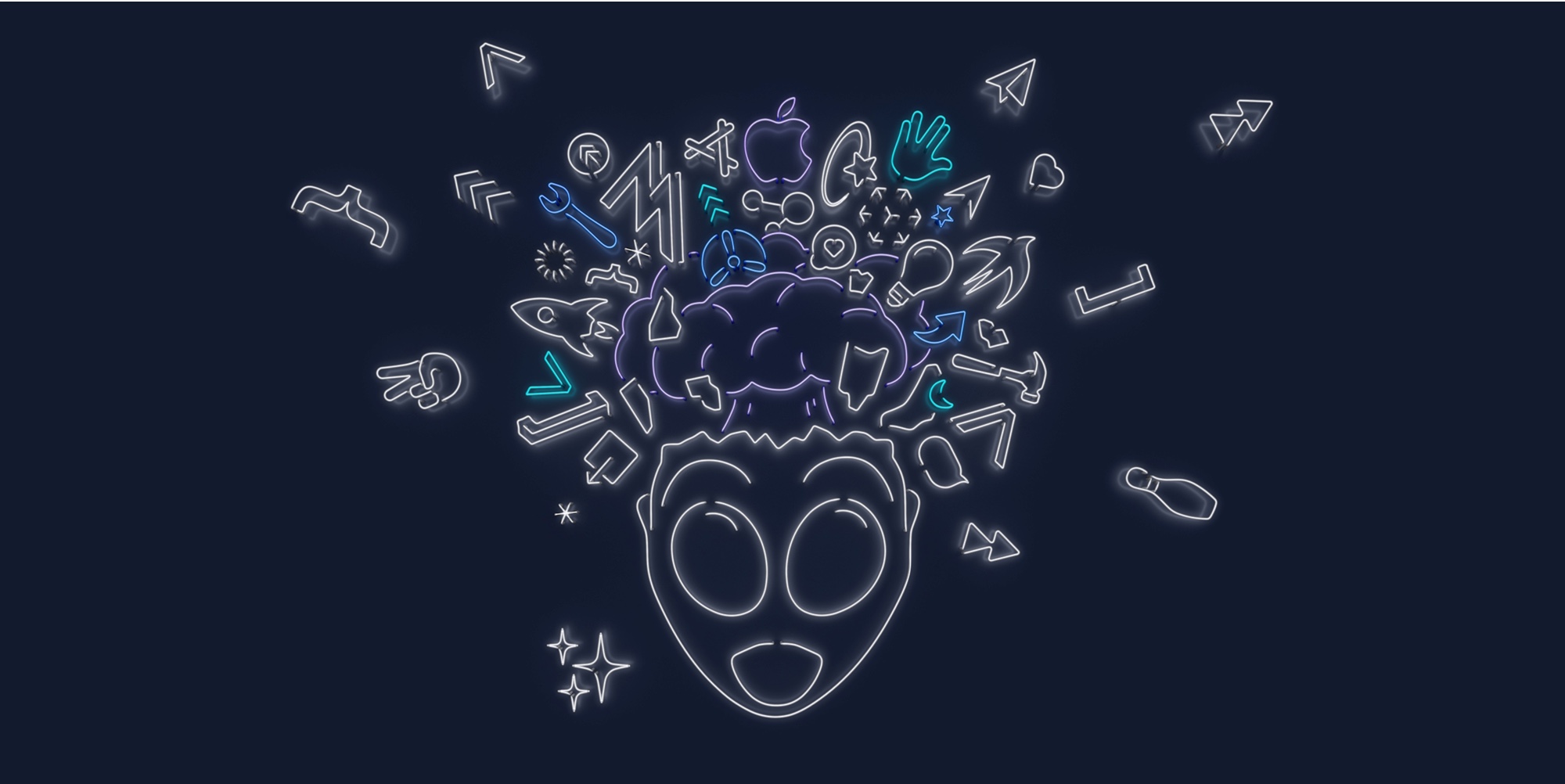 This year, the Apple fanatics of the office gathered in our boardroom to watch the Worldwide Developers Conference (WWDC) keynote presentation. Our president, Chris, had his fingers crossed for an improved Siri, bemoaning its inability to accurately listen to and understand language. The office was buzzing with energy. But as the intro video began to roll, a blanket of silence swept across the room.

Goodnight Developers is a well-produced, highly relatable, and unmistakably Apple take on the emotional rollercoaster that developers experience throughout the software development life cycle. It was a hopeful start to the morning.

Very briefly, here are a few interesting updates announced at WWDC19. I’ll get into the nitty-gritty of the stuff that really caught my eye in the next section.

To save you from the suspense, it didn’t appear as if Siri received any improvements to its listening comprehension. Needless to say, Chris was slightly disappointed (and if you really want to, you can read about his disappointment with the lack of awe-inspiring updates at last year’s WWDC here). However, there were some useful updates. In iOS 13, Siri will have neural text-to-speech support, meaning that it can generate its own responses and sound slightly less robotic. It will also read your text messages out loud when they arrive and allow you to respond to them using your voice. Siri has also been equipped with the ability to recognize your voice and personalize its responses to your commands, meaning the HomePod now has multi-user support.

It’s a performance beast. Fully maxed out, it runs on a 2.5 Ghz 28-core Intel Xeon W CPU, 1.5 TB RAM, and an AMD Radeon Pro Vega II Duo GPU. Our guess at the office is that this model will run for $40,000 US. The base model has a more modest 3.5 GHz 8-core Intel Xeon W CPU, 32 GB RAM, an AMD Radeon Pro 580X GPU, and will run for $6000 US. The monitor costs another $5000 US and the stand will set you back $1000 US. Yeah, $1000 US for the monitor stand. This machine is obviously catered to creative professionals, but seriously, how much do film editors make? The biggest takeaway here is that you probably can’t afford this glorified cheese grater.

While those were some cool updates, there were two overarching themes that I felt really strongly embodied the entire keynote: prioritizing privacy and streamlining support, specifically to MacOS.

In light of Apple’s plummeting stocks, it only makes sense that they took a valiant leap at saving face by driving home their commitment to privacy. And it was indeed a valiant effort. In classic Apple fashion, bold white text plastered across black backgrounds relentlessly reminded conference attendees that:

With tech giants such as Facebook and Uber increasingly under scrutiny for privacy scandals, it was nice to see Apple unveil some new security features for their users.

If you’ve been uneasy about using single sign-on (SSO) tools offered by Facebook and Google, perhaps the more secure “Sign in with Apple” is the solution for you. Apple’s new security features are about giving the end user control over their own data. With Apple’s SSO, data collection is restricted to just the user’s name and email. In addition, users have the option to hide their emails when registering for third-party services.

If this option is ticked off, a randomly generated email (eg. fc452bd5ea@privaterelay.appleid.com) will be used to forward messages from third-party services to your real address. Apple’s SSO also protects accounts using two-factor authentication and has Touch ID and Face ID integration for a quick and secure login. From a developer’s standpoint, “Sign in with Apple” is awesome because its simple API allows us to easily implement the button into the apps we’re building.

Despite Apple HomePod’s abysmal adoption rates since its release in Q1 2018, I think HomeKit will survive. As a parent, I know that a lot of families will appreciate this year’s new additions to the line-up of HomeKit-enabled devices.

With HomeKit Secure Video, users can locally analyze video footage on their iPad, Apple TV, or HomePod (said no one ever). This footage is then encrypted and securely stored on iCloud. Traditional home cameras, on the other hand, compromise user security by sending the user’s video footage directly to the cloud for analysis. With big names like Logitech, Netatmo, and Eufy already onboard, I think it’s safe to expect more devices to receive support in the near future! Routers have also received support in HomeKit, letting you firewall off your smart accessories and protect your home network. The first HomeKit-enabled routers are from Linksys, Eero, and Spectrum.

When Apple announced a noise app that warns users when sound levels exceed the recommended 90dB threshold, my coworker’s immediate response was “Apple’s going to listen to everything we say!” As if on cue, they responded:

Apple promised us that the app only periodically samples audio, and never records or saves any. Apple also announced a new app to help women track data related to their menstrual cycles. This information will be stored locally, and won’t be shared without your authorization. It’s great to see Apple fostering trust with their users by taking a privacy-first approach with personal information.

Sometimes, location sharing is useful. In iOS 13, users will now have the option to limit the amount of tracking data that third-party apps can collect. Rather than definitively allowing or blocking apps from accessing your location, you can now choose to allow an app to get location information once, and prompt you for re-authentication each time it wants to track your whereabouts. When you do grant third-party apps your location data, a report will be generated on your iPhone so that you know what they are up to. Furthermore, Apple will prevent apps from using your Wi-Fi network, IP address, and bluetooth beacon from tracking your location. There is also a new Find My app that allows your lost, offline Apple device to broadcast bluetooth signals that can be picked up by nearby Apple devices which will transmit your device’s location to the cloud. The craziest part is that this entire interaction between apple devices is encrypted and anonymous!

Something I really appreciated about this year’s update was how well in tune Apple was with their vision of creating a well-integrated ecosystem of products.

This is a huge one, especially because many companies have been running web apps for the Mac platform. Project Catalyst allows developers to easily add Mac support to an iOS app by ticking off the Mac checkbox under General > Deployment Info in an Xcode project. This will port iPad apps to macOS with the frameworks, resources, and runtime environment that you’re already accustomed to with traditional Mac apps. Now there’s no excuse to raise the bar in terms of performance and quality for Mac applications. Development teams will be able to create single apps that work cross-platform from the iPhone to the iPad to the Mac. In fact, it took just days for Gameloft and Twitter to port their apps over to macOS. I look forward to seeing apps like Slack, JIRA and Discord take advantage of this.

At TTT, we’re constantly thinking about how we can create the best possible software for our clients’ users. Accessibility plays a huge role in our design process, which is why the new assistive technologies that are coming to macOS Catalina (and already exist on iOS and iPadOS) are really mind blowing. Voice Control allows the user to essentially control every aspect of their Apple device with just their voice. Labels and grids allow the user to intuitively navigate their systems and control touch gestures such as tapping and swiping with their voice. Of course, audio is processed locally on-device, so privacy is a given!

This is great news for everyone who owns a Mac and an iPad! Sidecar will allow users to implement their iPads as a second display or a drawing tablet for their Mac. I can see this feature being especially useful for creative professionals who want more real estate when editing videos, doing graphic design, or marking up documents. This is also great news for people working on the go. You can wirelessly pair your iPad to your Mac to quickly set-up your own portable workstation.

When Apple officially announced DualShock 4 and Xbox One controller support for iOS, iPadOS, and tvOS, it came as quite a shock. Historically, Apple hasn’t been known as the type to integrate other companies into their business model. I think most people expected Apple to release their own controller alongside the launch of Apple Arcade in the fall, so this was a pleasant surprise.

This framework will simplify the front end development process. SwiftUI allows us to drag and drop UI elements and have code automatically generated for us. It will also allow us, without having to compile our code, to see real-time changes to the UI as we work. However, this is not cross-platform and will not support older versions of iOS (prior to iOS 13). It’s still too early to tell how I will implement SwiftUI into my own workflow, but I’ll be sticking with React Native for the time being.

Overall, a really solid step forward this year. I’m already excited for WWDC20! If anyone from Apple reads this, can you record a voice memo on your Apple Watch as a reminder to send a ticket my way?