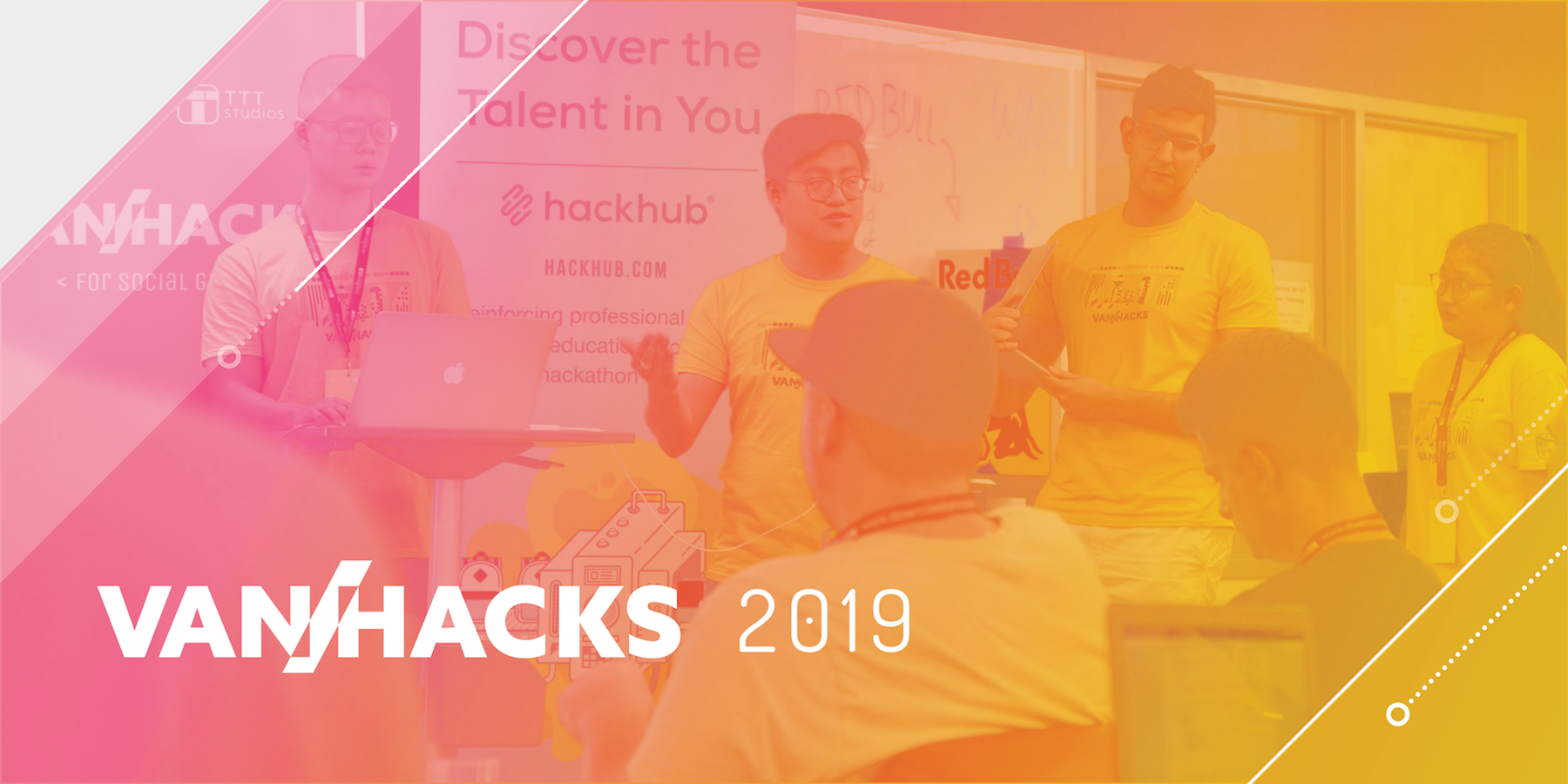 The 3rd annual VanHacks has officially come to a close.

Dare I say, this was our best one yet. It was so heartwarming to see all the hackers working so hard on finding solutions for non-profit organizations throughout Vancouver. Below is a little recap from my point of view on last weekend!

At around 4:50pm I went over to BCIT to set up the venue.

Hunter from Red Bull wheeled in two fridges of generously stocked liquid energy for our hackers while I shuffled some things around. Cynthia from BCIT was amazingly helpful as always. With her help, the set-up was quick and painless. With everything ready to go for tomorrow morning, I made my way back to TTT to join the fun.

When I arrived back at our office for the team formation social, the room was already buzzing with excitement and activity. Chris described it as the most “low friction” event he’s ever witnessed.

As if everyone knew exactly what they were doing, groups formed themselves, people were mingling and having conversations, and everyone got in the spirit for the weekend.

Hackers who came without a group quickly found their weekend partners, and I found some time to catch up with my friends from VSW.

With our bellies full of pizza and pop, we readied ourselves for the weekend ahead.

Not gonna lie. Unlike Chris, I’m not a morning person. If it wasn’t for the fresh aroma of Nespresso coffee wafting through my nostrils, I’m not sure I could’ve stayed awake at 7:00am on a Saturday morning with a 15 hour day ahead of me.

With the banners set up and the volunteers briefed on their tasks, registration started bright and early at 8:00am. To my relief, people were being signed in smoothly, and things were falling into place nicely for Chris to give his opening speech on time.

As soon as 9:00am hit, we gathered everyone around as Chris gave us a rundown of the weekend and invigorated everyone with his bottomless energy. Seriously. In the three years I’ve known the guy, I’ve never seen him runout. It’s impressive!

With the morning formalities out of the way, the hacking began and the energy of the room shifted from excitement to one of focus and concentration. We had some stragglers come in late in the day, but by mid-afternoon, I’m proud to say we had an amazing 90% attendance rate!

At about 11am, Yan from HackHub hosted two back to back workshops. The first was an introduction and orientation to using HackHub as the platform for the hackathon. For those of you who have never heard of HackHub, it is a platform made specifically for hackathons, born out of a hackathon.

The second workshop showcased Protopie, an interactive prototyping tool that is simple and easy to use.

Around 3pm, we were blessed with some complimentary donuts generously provided by Cartems. Needless to say, they went quick. We had a plethora and a great variety of food over the weekend and nothing disappeared as quickly as these donuts did.

We had a proper dinner later that night with catering ordered from the Potluck Cafe, who provided our catering last year, and was one of the non-profit groups we served in the first ever VanHacks! They are an amazing organization who works with individuals with barriers to traditional employment. They train these individuals, provide them with skills, and help integrate them into the workplace. On top of that, their food is phenomenal!

The rest of the day went by quite smoothly as the teams hacked away at their solutions.

With whatever brain cells I had left at 10:00pm on Saturday night, I decided it would be a good idea to unplug the Nespresso coffee machine to save electricity…😬

I came in Sunday morning mortified to find that the coffee machine wasn’t working. After walking shamelessly past the line of tired Hackers waiting for their morning espresso, I remembered what I had done the night before.

PSA: Remember folks, when unplugging a piece of appliance, one must first turn the power off before pulling the plug, or you might blow the fuse 🙂

Luckily for me, Jason from Nespresso has the patience of a saint. He quickly understood the problem through my panicked rambling over the phone and took the time out of his day off to come help fix the problem. With our caffeine supply restored, things settled down again and hackers worked to add the finishing touches to their projects as we started closing in on the deadline.

Around 1:30pm, our judges started arriving. For the first round we had Yan Hong (HackHub), Vivian Chan (VSW), and Andy Wong (Realtor.com) set up in judging room #1.

We had 26 teams split into two rooms, with only 8 finalists moving through to the finals.

I wish I could’ve watched some of these presentations. From what the judges have been telling me, the quality of submissions were very high, and they had a difficult time narrowing it down to the final 8. After all the projects were scored, the judges from the two rooms had a quick rendezvous to make sure their decision was fair.

With that, we have our 8 finalists who will be presenting to our final judges: Kyle Campbell (CTO.ai), Ozge Uncu (KPMG), Khurram Virani (Lighthouse Labs), and Jose Hernandez (TTT Studios).

Before we began the final round of judging, we had representatives from our key sponsors say a few words.

Once again, the final teams impressed our judges with their presentations. While we wish all of them could be winners, we had to pick the top three.

Shake it Off (3rd Place)

In third place, we have Team Shake it Off, who chose “Kids Help Hotline” as the group to serve. Words can be difficult to use. The “Shake it off” app attempts to solve this but installing a feature where kids can shake their phone to ask for help without having to use words.

Team Blue Whale has chosen BC Parks as the NPO to serve. Their “Nature Quest” app is aimed at individuals who love nature and want to help keep parks beautiful. It allows people to sign up as volunteers and gamifies the experience by providing rewards and points for donations or completing certain activities.

Finally, we have our VanHacks 2019 winners! Self described as “Tinder for dogs”, Pet Luv is an app where bored or lonely humans can browse the SPCA’s database for a furry friend they’d like to take for a walk. This not only gives the dogs (who are cooped up for most of the day) some much needed physical activity, but also helps build relationships and boost adoption rates. And of course, as if it was fate, the cheque we handed them had a gigantic picture of Roxy on it.

Organizing VanHacks has been an incredible experience for me. A lot of work goes into it, and it can feel overwhelming at times, but seeing what comes out of it always makes it worthwhile! Next time around, remind me to order a lot less food, and keep me away from the coffee machine.

As a final note, I’d like to thank all the volunteers from VSW who helped out at this event. These are people who chose to dedicate their own time to be there over the weekend, and some even stayed well past their shift to help out when they didn’t need to. For me, the hackers and the volunteers are the real superstars of VanHacks. You truly embody the spirit of Vancouver and remind me of why I love this city.