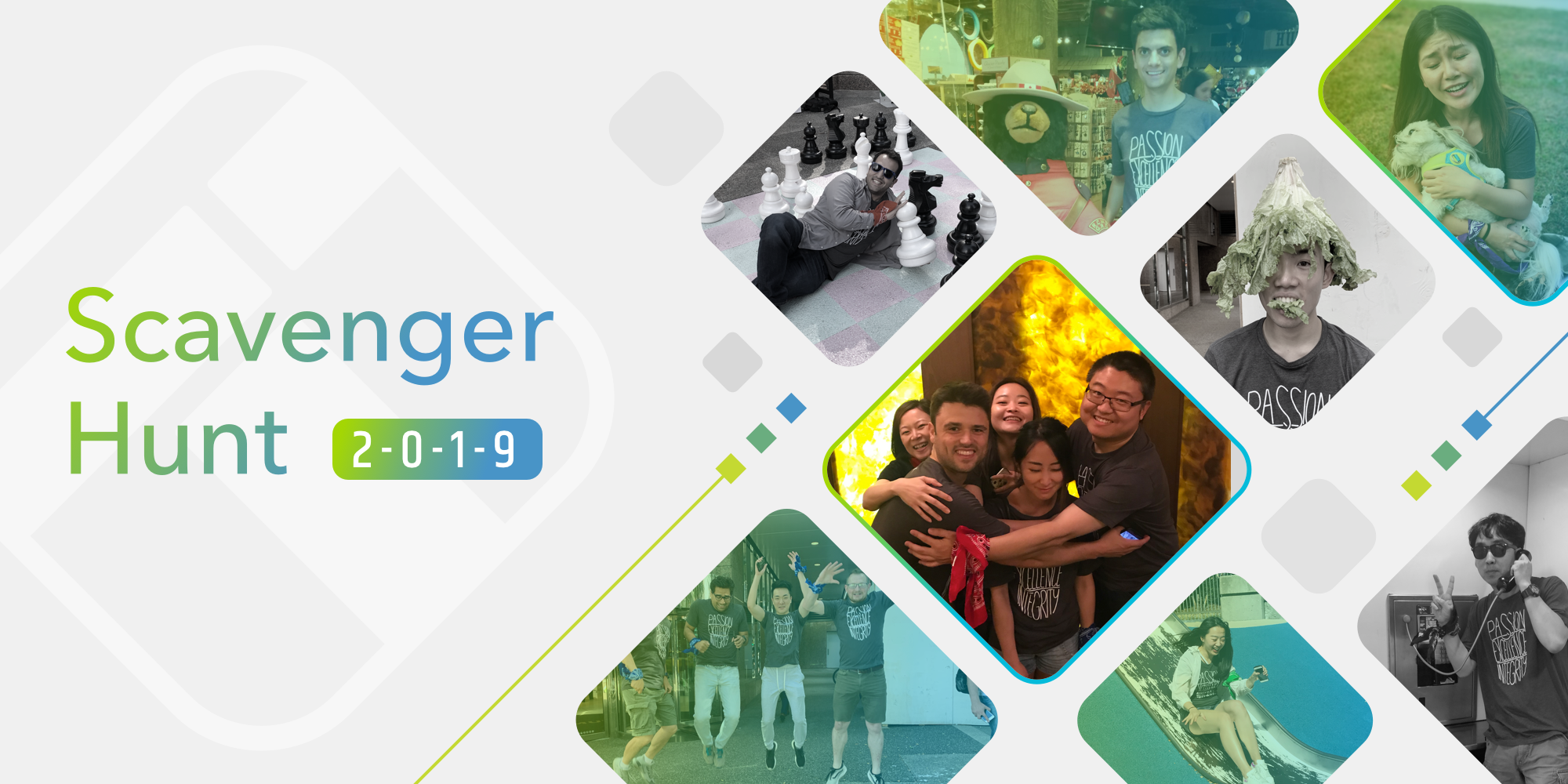 At T minus 30 minutes, Mitch fired off a Slack message to the #general channel, reminding us that only half an hour remained before the streets of Vancouver would be turned into the venue of our 2019 TTT Scavenger Hunt. Mitch wasn’t the only one who couldn’t contain his excitement. His message was met with an onslaught of animated GIFs, affectionately known to us as GIPHYS.

At this point, tensions were running high. Mitch fired off another Slack reminder in response to the wave of eager energy that had engulfed our office. People started feeling restless.

With 8 minutes to go, my fingers started to twitch. I broke convention and fired off my own Slack message 3 minutes premature. People began to get out of their chairs, stretch, and change into activewear. It was almost time.

Time for take-off! Computers away. Let’s do this.

We headed to the events space to get briefed on the rules and find out who our teammates and rivals would be for the next four hours.

The company was divided into five teams, each captained by a co-op student. The teams were charged with completing as many of the 75 tasks on the scavenger list as they could, with point values ranging from 1 to 5 depending on their difficulty. This year, there were an additional 3 tasks that were extra hard, worth 10 points each, and only redeemable by the first team to upload a photo or video for each of the tasks. At 7:00 PM, we met at Rogue for dinner to watch the submissions, debate point totals, paint out hypothetical “we could have easily completed x for y points to win” scenarios, and of course announce the winners of the prized TTT Scavenger Hunt Trophy. The penalty for late arrivals? One point for each minute that a team member wasn’t present. Unfortunately for the teams that didn’t win, nobody came in late.

For the third consecutive year, I found myself on the wrong end of the standings. Had housekeeping at Four Seasons been free to take us up, we’d be two spots higher—not to mention the many duplicate photos we took. And no, I’m still unsure if I’ve gotten all the glitter off. I really outdid myself with that one.

Task 39: Team member building and completing a small house made of Lego (2 points)

Task 26: Team member holding a dog like a baby (2 points)

Task 11: Team members sitting on the stairs near the Robson skating rink (1 point)

Tucked in and kicking ass orange

This team had some really awesome submissions, but opted not to shoot for the ten point special tasks and were not able to climb higher than third in this year’s standings. Check out some of their photos below!

Task 28: Team member proposing to another team member under the diamond ring art piece on the beach (2 points)

Task 66: Team member with a human in a wedding dress (3 points)

Task 43: Team member pretending to be injured with a soccer ball (2 points)

The original Nick in red

The red team stole the 10 point Four Seasons special task from my team. Look closely, and you’ll see Nick waving enthusiastically from a window on the bottom floor of the hotel. Despite being the only team to successfully complete this particular special task, red was only able to tie for third.

Task 49: Team member with a statue of a bear wearing an RCMP uniform (2 points)

Task 29: Photo of all team members with one other person from another team embracing that person (2 points)

Special task: Team member standing and waving in the window of a room at the Four Seasons hotel, photo must be taken from our office (10 points)

Task 67: Team member dancing on the deck of our old office on Alberni (3 points)

Two teams really pulled away from the rest of the competition, and the unlucky runner-up this year was purple. Without attempting or completing a single special task, purple grinded their way to an impressive 109 points by ticking off just about everything else on the scavenger hunt list. And yes, the picture of Chris pointing at the camera is a screenshot from a video of him casually getting into a car and receiving a ride from a family of complete strangers.

Task 74: Team member holding a children’s book with a cartoon dog and dragon together on the cover (5 points)

Task 53: Team member asking for and receiving a ride from a person in a car for one city block (3 points)

Task 46: Team member standing in front of a bus with a destination saying “Not in Service” (2 points)

Task 40: Team member getting kissed on the cheek from an ESL student from a different country (2 points)

With 112 points, green was crowned champion of the 2019 TTT Scavenger Hunt.

Captained by Gordon, the green team threw most of their eggs into one basket—or two, to be precise. They took a risk by sending Mitch off to Kits for a three lap swim in the pool, and Gordon for a joyride on a rented bike around the entirety of Stanley Park. Their strategy paid off, as they were the first and only team to successfully complete those two special tasks, earning them a collective 20 points for their efforts. While those special tasks chewed away at their valuable time, however, the purple team pulled ahead in the standings. Had it not been for some last minute submissions and a clutch 3 point skipping rope performance from Becky, Mitch, and Xiaowei in front of Rogue minutes before 7 pm, the outcome could have been very different. Hats off to the green team for a stellar performance and well deserved victory 🏆

Special task: Team member renting a bike and riding around the entirety of Stanley Park (10 points)

More than just a competition

As our competitive energy dwindled and channeled itself into a growing appetite for chowder and steak, I began to reflect. Despite the bitter taste in my mouth from finishing dead last for the third year in a row, I genuinely had a lot of fun. A trophy would have been nice, but the TTT Scavenger Hunt is so much more than a competition. It’s an opportunity for us to connect with and appreciate the amazing people that constitute the TTT family. It’s an occasion we use to acknowledge the hard work and departure of our co-op students as they prepare to head back to school. And most importantly, it’s an opportunity for us to celebrate another successful year building innovative software that brings us closer to our vision of positively impacting a billion lives.