Journey of a TTT’er with Mark Wilson 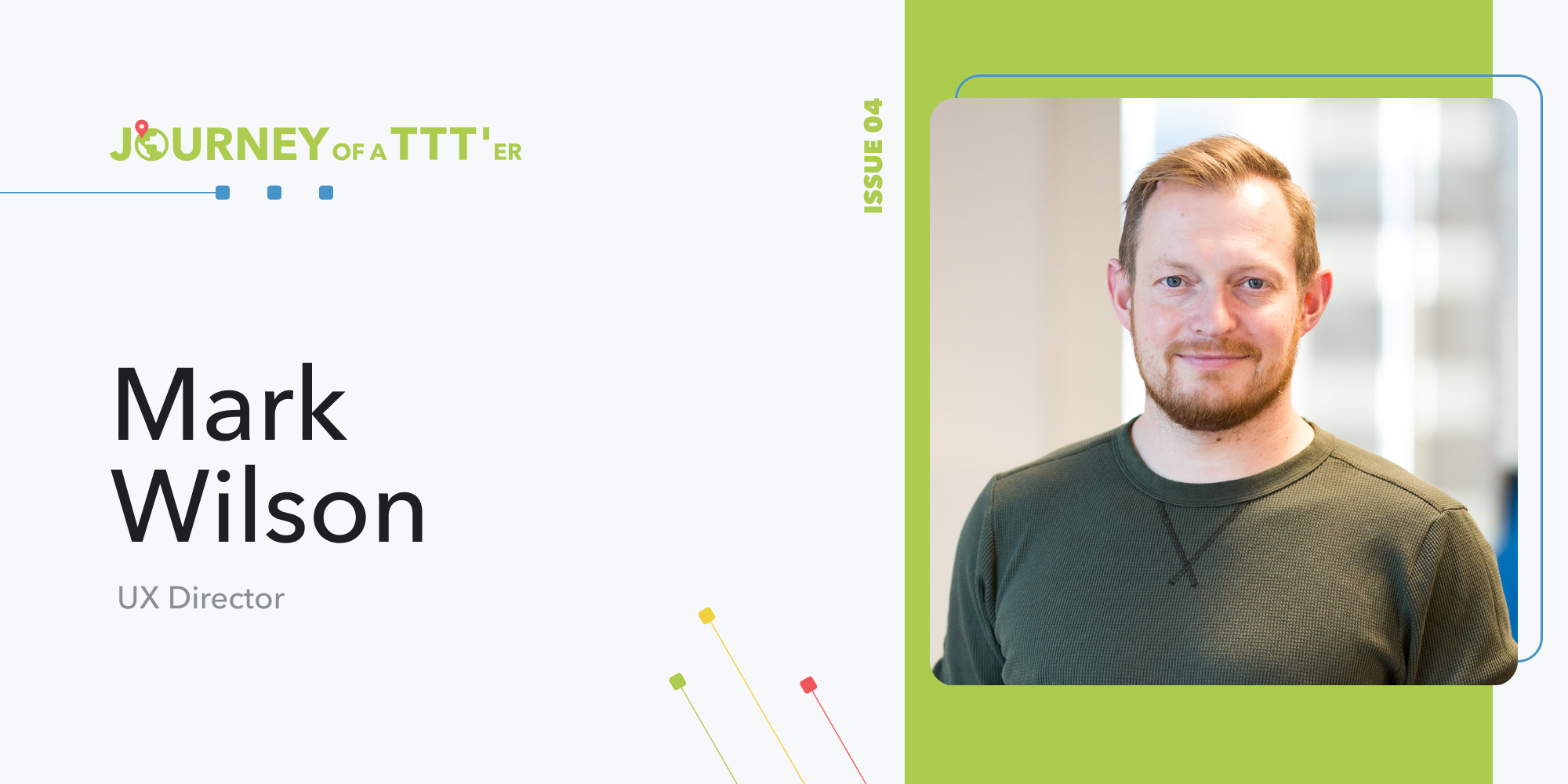 Introducing one of the most calm and easy going TTT’ers in the office, our favourite British UX Director, Mark Wilson! He has worked his design magic on various projects and has proven himself as a curious problem solver with a sense of humour you don’t always see coming. The design team is known for being soft spoken, and Mark fits this bill. However, during weekly stand ups and team meetings, his wittiness will never go unnoticed. Not one to shy away from challenges, Mark faces obstacles head on – whether they be in the office, or on the slopes. This active lad takes on all of life’s adventures!

Favourite Food: Toss up between Pizza and Curry – my go-to comfort foods

Describe yourself in three words:

“Driven, relaxed, thrill-seeker (which is why I injure myself…)”

“I grew up in a seaside town in England called Lytham, where I developed a curiosity for how things worked. My inquisitiveness led to me taking apart a record player that my parents had given me at a young age (strangely I was still given access to tools after that). You would have also found me with a paintbrush or pencil in my hands as I explored my ‘artistic’ side. With these two characteristics it was only natural I’d pursue a career in design, which I followed through by studying for a BA in Graphic Arts and Design in the UK.

I started working before website and digital design was a thing, so most of my experience comes from print. I got my first job in 2008 working for small agencies, about 20-30 people in size, and startups of roughly 40 people. Then about two or three years of work, I realized things were moving towards digital, so I started to learn how to code and design for websites.

I spent five years at a company called Force 24, which did marketing automation. I also worked remotely for them from Canada until October of last year, which is when I started working at TTT Studios. I’ve been in Vancouver for the last year and a half, and don’t plan on leaving anytime soon.”

How did you end up at TTT? First Impressions?

“I had just gotten a work visa and was looking for digital companies in Vancouver. When I saw TTT on glassdoor, they looked like a company I wanted to work for — the office gave off a family vibe and the team looked like a fun, diverse crowd. I also appreciated that the UX design process was already in place since I previously had to create it myself, which was hard work. I was looking for the next level and I feel like I definitely found it here.”

“I’ve had many opportunities to travel around Europe since it was so close. One of my first backpacking trips was when I was 19 and travelled from Holland to Spain and Portugal to attend a Radiohead concert (my favourite song is ‘Creep’). We travelled for two weeks using the train throughout Europe and ended up at the concert in Porto, Portugal, which is where the fortified wine port comes from. We had bought tickets to the concert and needed to figure out a way to get there – so we backpacked! I don’t go to many concerts anymore, I get a bit too claustrophobic when I get to the front. I still have a lot of great memories, though. Some of my other favourite concerts have been Oasis, Muse, Foo Fighters.

I’ve also always wanted to learn the saxophone. I’m not a huge jazz fan, but I always liked the sound of the saxophone. My grandad bought me a drum set when I was 5 and my mom asked him to take it back because I wasn’t really musically inclined. So I never actually received it, but I knew he bought it for me.”

“The games at the Christmas party. It showed a fun and ruthless side to the people here. Also, the weekly stand ups with the team, and discovering some fun facts about the people I work with.”

“It takes a lot to stress me out.”

“Big projects that are challenging and involve a lot of thinking. I love taking on a project from the beginning, collaborating with the client, solving problems, developing the scope and coming up with solutions.”

“In my spare time I like to do a sport for every season – snowboarding in the winter and mountain biking in the summer. I never snowboarded much in England due to lack of snow. There, we have a ‘fridge’, which is an indoor slope with fake snow. If you ask me, the real deal is much better.

Last summer, I tried longboarding. It has some movements similar to snowboarding, except it’s a lot faster. I usually mountain bike at Burnaby Mountain, although I’m trying to work up to Mount Fromme and Whistler. My main goal in the summer is to get outside and enjoy the outdoors while avoiding any wildlife with teeth and claws. We don’t have that in the U.K.”

“Moving to Canada and leaving the UK. It was an exciting transition. I had never lived anywhere other than England, so there was an excitement of everything being new and different. My girlfriend had a visa to work here and I came over on a holiday visa and worked remotely. Then I eventually got a work permit and now am working here!”

“Elon Musk. He’s a visionary that doesn’t seem to be held back by greed; he wants to do the best for mankind through his companies. Everything he has done has improved what’s been done before.”

For more insight from Mark, check his blog on CTA buttons here.