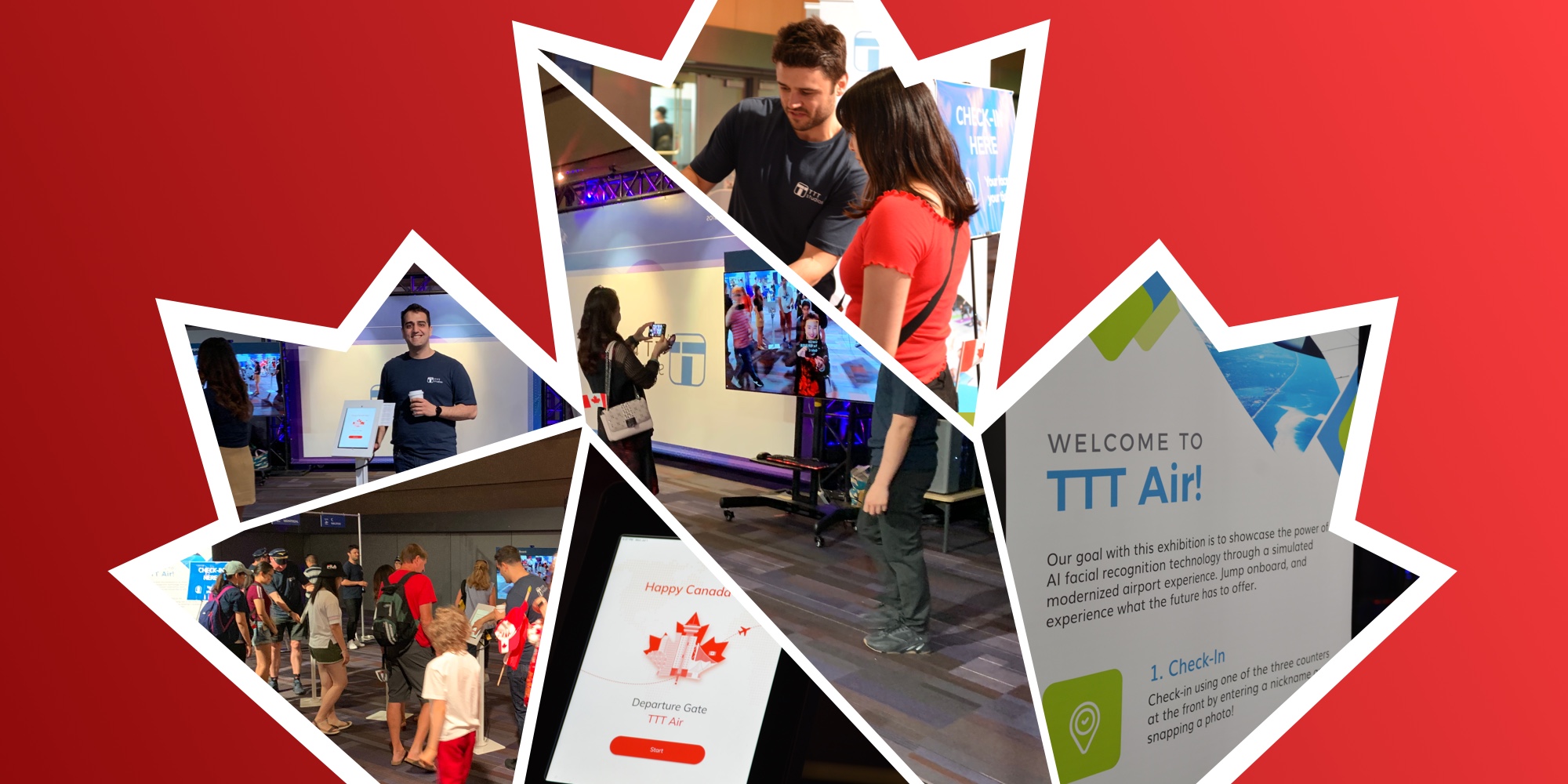 In the past year, TTT has invested a lot into AI and we’re really proud of the facial recognition technology we’ve developed. Our software has a 99.8% accuracy rate, in addition to built-in anti-spoofing which shields users against impersonation attacks. It can recognize a person based on a single picture and tell our twin co-founders apart—a task that Apple Face ID struggles with. When used responsibly, we truly believe that facial recognition technology can be leveraged to improve user experience across a broad scope of industries. What better way to showcase this than with a simulated modernized airport experience on Canada’s 152nd birthday?

After countless hours spent pinning down the logistics and walking through trial runs with the team at the office, we were finally ready. On Sunday afternoon, along with the rest of the newly formed TTT cabin crew, I scampered to the Innovation Zone at Canada Place to set-up our exhibit. On Monday morning, it was showtime. Move over Air Canada, TTT Air is the nation’s new national airline.

Good afternoon passengers, this is the pre-boarding announcement for flight 152 to Vancouver. At this time, we would like to invite passengers who require special assistance and passengers with children to begin boarding the plane. Today, your face will be your boarding pass and personal identification. This will speed up the boarding time exponentially, so don’t get too comfortable—first class passengers will be called up momentarily. Thank you for your patience and for choosing to fly with TTT Air!

Our exhibit was an interactive three-step process. The idea was to demonstrate the ability of facial recognition technology to expedite an otherwise long-drawn-out boarding process typical of most airports.

Following intuitive on-screen instructions, “passengers” checked-in to our system by simply choosing a language, entering a nickname, and snapping a selfie. Our sociable TTT flight attendants paced the aisles, ready to jump into action and address passenger queries.

After checking in, passengers simply had to walk up to our departure board. The system would recognize the passengers and display their nickname and gate number on the screen!

On Canada Day, TTT Air was operating flights to Toronto, Montreal, and Halifax. To board their plane, passengers filed to the gate they were assigned at the departure board. If standing at the appropriate gate, our facial recognition system would recognize the passenger and confirm that they’d successfully boarded their flight. As a souvenir, all passengers received a cute Canada-Day-themed TTT sticker designed by our very talented UI/UX designer, Andrea Lin.

We were thrilled with the positive reception we received. Over 1000 passengers “boarded” TTT Air in 9 different languages. To say it was a success is a gross understatement.

In light of the escalating public fear toward facial recognition AI, it was a breath of fresh air to see people genuinely interested in our technology. By far the most common response we received that day: faces lit up by the novelty, convenience, and efficiency of our sign-in system, followed promptly by an upbeat: “when can we expect to see this at the airport?” I wish I could tell you, but I really don’t know. That’s a question you’ll have to bring up with YVR.

The kids, as you can tell, really loved our tech too. Then again, maybe they were just going through the motions to get a pick at one of Andrea’s lovely Canada-Day-themed TTT stickers—you can never tell with kids.

Although few and far between, there were a few understandably camera shy passengers who were reluctant to have their pictures taken.

To clarify, our facial recognition system doesn’t actually store any photos. In the initial check-in phase, users snap a selfie so that our AI can temporarily capture a mathematical representation of their face. In the final stage when passengers board the plane at the departure gate, the mathematical representation is immediately wiped from our system after it’s been used to verify their identity.

In the end, even the most stubborn skeptics softened up after our explanation and eventually gave the TTT Air boarding simulation a shot.

Humble brag from a Chinese tourist

At our exhibit, a Chinese tourist mentioned in passing that China recently started piloting a facial recognition system to pay for subway fares. He wasn’t lying. Two years prior, KFC China implemented their “Smile to Pay” system which allows customers to pay for food by scanning their face and linking their biometric data to a payment method. Facial recognition is also being used to check in guests at hotels, withdraw cash from banks, limit the amount of toilet paper dispensed to an individual using a public toilet, and of course to facilitate and expedite check-in, security, boarding, and arrivals at airports.

With such a ubiquitous presence in their daily lives, there are mounting concerns in China about facial recognition technology facilitating greater state control and abuse of power. But if we focus strictly on innovating for improvements in the user experience and placing a greater emphasis on privacy and security, facial recognition carries with it a lot of potential to optimize everyday personal workflows and business operations.

Already, we’re seeing facial recognition technology being deployed at airports across the globe in large cities including Atlanta, Amsterdam, Dubai, London, and Tokyo. In Montreal, the World Economic Forum, Canada, and the Netherlands are launching a pilot project for a digital aviation and security infrastructure that grants airline passengers a seamless, paperless, and secure travelling experience. This project is staged to use blockchain, cytology, and biometrics as its framework and is expected to be rolled out at the Pierre Elliot Trudeau (Montreal) and Pearson International (Toronto) airports in the first quarter of 2020. Perhaps the Vancouver International Airport will be third?

Thank you for choosing TTT Air. If there’s anything we can do to make you more comfortable, please don’t hesitate to ask. We’ll see you at the destination. Enjoy the flight!

VanHacks 2019 Recap
The 2019 TTT Scavenger Hunt
Introducing our new CEO: Jose Hernandez
Putting the VR in VRify
How to build an app in 100 days