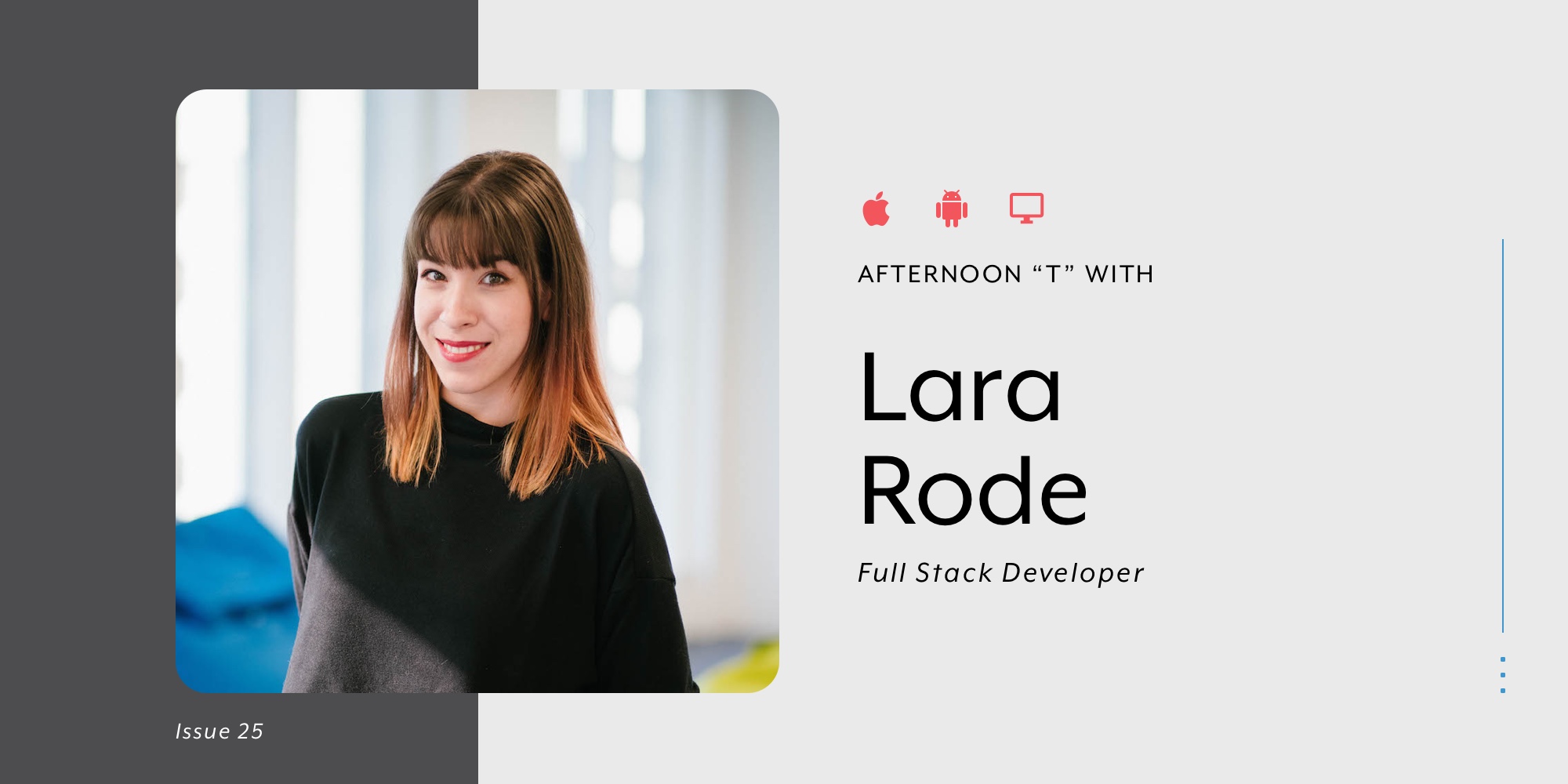 When I first met Lara, I already knew she was an OG TTT-er. She is one of the few people who have worked at all three offices that TTT has occupied. Starting as a co-op student back in 2016, Lara made quite an impression on us. She fit in perfectly with our quirky team culture given her knowledge of anime, multicoloured locks, and perfectly winged eyeliner. Not only can Lara make a mean hover animation as a software developer, but she is also a cosplayer that has a variety of cool alternate character personas. Without further ado, meet Lara—super nice, easy to work with, and one badass chick (although she might not agree).

Favourite game: Oh there are so many…let’s go with The Legend of Zelda series

Fun fact: I just started teaching HTML/CSS at VFS a couple weeks ago

“Okay. I grew up in Kelowna and moved to Vancouver for university at UBC. I chose computer science because I liked computers, but had never programmed before. It was the right choice because I ended up really liking it. I did my co-op at TTT in 2016 and loved it so much that when I finished my degree, I came back here right away.”

“I applied for the co-op job posting. My first co-op term was at a very ‘corporate’ company, so coming to TTT was very different. My first meeting with the team involved going out for dinner at Earls, singing karaoke, and then playing Mario Kart back at the office. I remember thinking ‘Wow, this is more fun than any other day at my last job, and it’s just the first day!’ Not to say that my first job was bad—I still learned a lot there! Just doesn’t quite compare to the fun culture of TTT.”

“I’m pretty into video games and anime. I’ve been cosplaying at conventions since I was in eighth grade. Cosplaying is basically dressing up in outfits as characters from games and shows. It’s fun being at conventions because everyone is really pumped about seeing their favourite characters come to life, asking for photos, and shouting random quotes from the game/show at you. It’s not just being at the con that’s fun, it’s also the actual making of the costume. Every year my group of friends and I decide on a group costume, and spend a few months leading up to the con sewing our outfits and building props together on the weekends. Last year I made two giant prop guns. They were really annoying to make but it’s always worth it when I finally finish them—and they didn’t fall apart mid-con (a common occurrence) which was cool! It’s fun being crafty, and since all my other hobbies and work is on a screen, it’s a really nice change.”

“Our Christmas party back in 2016. Everyone had a lot of fun, we played Christmas games, and made drinks. But sadly, the hot chocolate made one of our coworkers very gassy and it was so bad that everyone left. They’re still pretty proud of the fact that they can say their fart cleared out the company Christmas party.”

“I’m pretty freakin’ good at Dance Dance Revolution. But most of the arcades don’t have DDR anymore so I don’t ever get the chance to show off my mad skills.”

“I like front end work because I like making stuff look pretty. With front end, you can see and interact with the results of your code instantly on the screen. It’s really fulfilling making components that work well and look good. Especially animations, I find it really satisfying when I make a sleek hover animation. Once it’s done I tend to just sit there on the page, admiringly hovering my mouse on and off it for a while.”

“I mostly play video games, go for bike rides, walks, hikes, or head to the beach when it’s nice out. I used to spend all my time in my basement with the lights off playing video games, but I now have a great appreciation for sunny days. In fact, when you look around the office, my row is usually one of the only ones that has the blinds open all the time. I also enjoy spending time cuddling with my cat of course.” (I’m so jealous).

“Toby Fox, the creator of Undertale, and ConcernedApe, the creator of Stardew Valley. They are indie game developers that both did everything from programming, design, art, and music all (or mostly) by themselves. That’s pretty crazy! I admire their work ethic to actually finish great projects on their own.”

Written by Aaron Rodriguez-Correa | Jun 29
We use cookies to improve your browsing experience and to understand how you interact with our site. By continuing to use this site, you agree to our use of cookies as outlined in our privacy policy.