5 most exciting technologies in 2018 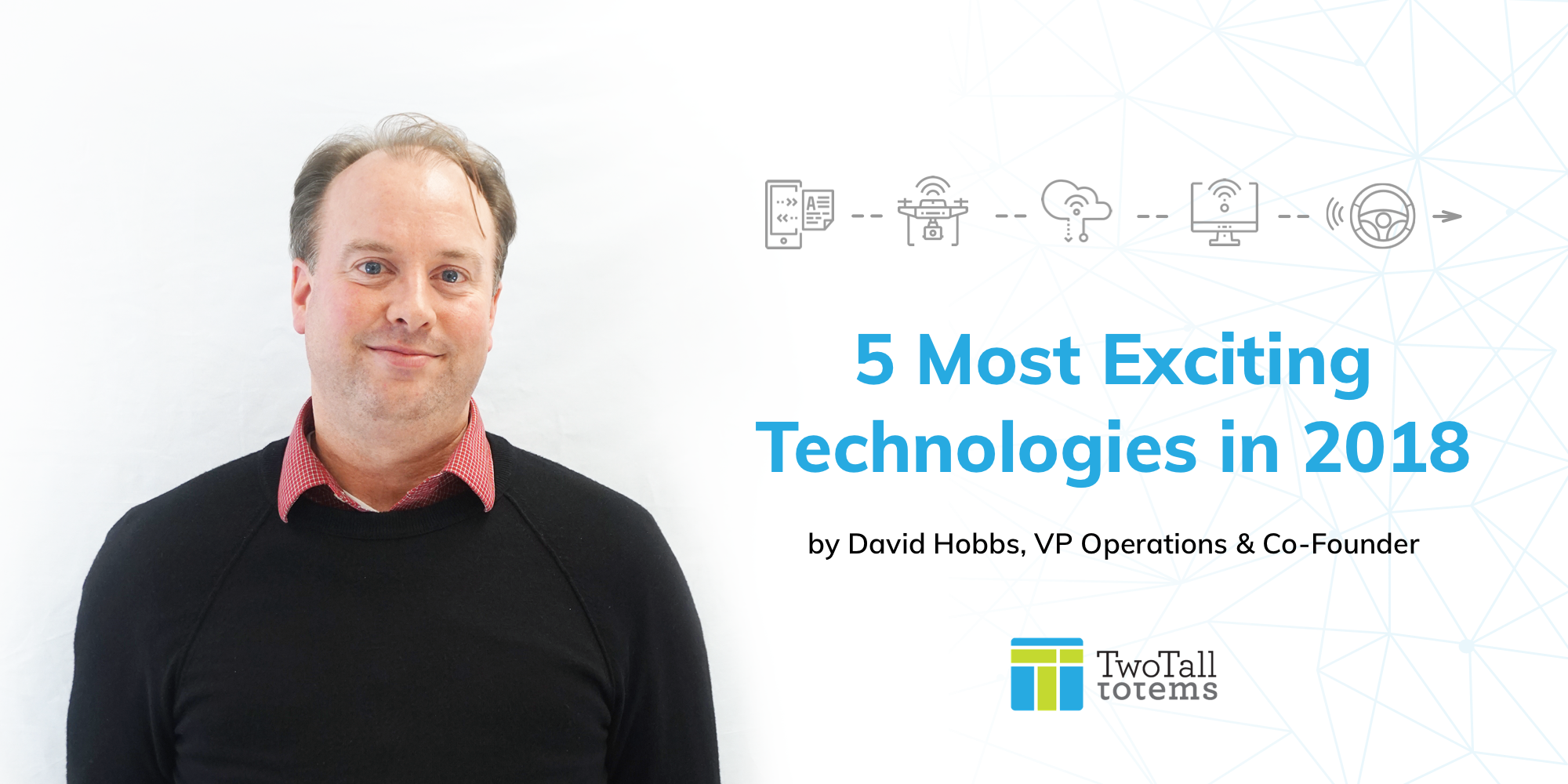 There is more potential than ever for businesses to leverage emerging technologies in 2018. We’ve only just scratched the surface last year in 2017 for technologies like facial recognition, self driving cars, smart home gadgets etc. There’s a lot of potential for us at Two Tall Totems to play a pivotal role in this tech and our engineers are very excited about the opportunity. Below are five of the things I’m personally most excited about for the upcoming year.

Artificial Intelligence in general was definitely the number one hot topic of 2017. AI was constantly being talked about on every tech blog/news outlet last year, and for good reason.

Smart security cameras can recognize distinguishing attributes like gender, age range, facial accessories, and even emotions. Beyond that, these systems now have the ability to learn and recognize human behaviour. We have cameras that can tell if someone is texting while driving. Eventually these individual behaviours could lead to the discovery of patterns and links could predict malicious or illegal actions before they occur.

From a consumer perspective, smart security for the home is becoming more prevalent. You have technology that’s able to learn and recognize familiar faces from repeated exposure. If a stranger was to enter my house, a smart security camera could recognize the person as an intruder and automatically send a notification to my phone, or notify the police.

The challenge but also opportunity around computer vision is finding wider business applications beyond security. Understanding customer behaviours could open up doors for businesses to serve their customers better. The even bigger challenge is striking the balance between security and privacy. We don’t want this to become another Black Mirror episode.

In 2017 we saw the release of Google Home joining the smart home market that has previously been dominated by the Amazon Echo. In 2018, we will see Apple’s HomePod join the party. As we get more and more peripherals that can connect to and interact with these hubs, the use cases will only get more interesting. It’s an inevitable eventuality.

The spending on IoT related products is projected to reach $1.4 trillion in 2021 with 100 billion connected devices by 2025. That’s a 16.7% increase from what it was in 2016. I’m excited to see how this space develops and all the different opportunities that come as everything becomes more connected.

The need for Fog/Edge Computing goes hand in hand with the projected growth of IoT peripherals. Eventually the amount of data being transmitted from each device will be so vast that the cloud won’t be able to handle it. My doppleganger has written a blog a month ago explaining how Fog/Edge Computing works. The existence of this concept allows for the prevalence and mass expansion of IoT, and a world where everything is connected. This also goes hand in hand with autonomous driving (which is number 5 on this list) where quick decision making could be the difference between life and death.

Even if you know nothing about technology, you’ve likely heard about the Bitcoin surge last year where many people paid attention to cryptocurrency for the first time in their lives. I believe cryptocurrency is interesting, but the technology that enables cryptocurrency – blockchain – is fascinating.
Think of blockchain as a historical fabric underneath recording everything that happens, be it every digital transaction or exchange of goods and services or private data—exactly as it occurs. Then the chain stitches that data into encrypted blocks that can never be modified and scatters the blocks across a worldwide network of distributed computers or “nodes.”

As Tesla comes in, there’s a race to automation. It’s crazy to think about how future generations likely will never learn to drive a car. It is such a disruptive technology that systems around it will have to change to accommodate the mass adoption when it comes to that.

It’s already been proven that cars can drive themselves. The complexity here revolves around the grey areas that exist in the human decision making process. If someone jaywalks, does the vehicle swerve and potentially hurt the person who’s inside the vehicle, or maintain course and try to stop, potentially injuring the jaywalker? Someone will have to program the idea of morality into these vehicles and I’m curious to see what the result will be.

Honestly, I just can’t wait to not have to take my kids to soccer practices in the rain.

David is the Co-founder, and VP of Operations at TTT Studios. With over 20 years of experience in the tech industry as both a developer and an entrepreneur, David has the perfect combination of technical expertise and business acumen.

How TTT is Going Back to Work at the Office
How we built ethics into our facial recognition app Amanda AI
How to finance your startup
The hypocrisy of parental controls
Crypto collectibles: The non-fungible token craze